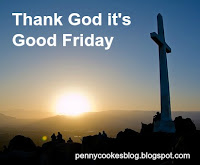 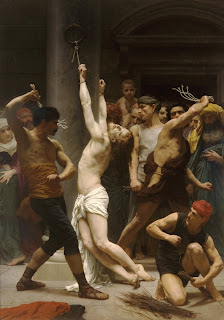 The first few blows would have caused bruising, followed by cutting through skin, and soon deeper tissues until his skin hung in shreds (Psalm 22:17). This brutal practice would only be stopped when the person was near death, but not dead.

Then the half-dead Jesus was mocked for claiming to be the prophesied and long-awaited Savior King and crowned with a circle of long thorn branches, pressed hard and deep onto his head. 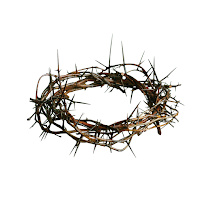 One of hundreds of prophecies fulfilled.*
Yet, they could do nothing to Him the Father had not permitted. Even the crown of thorns is a symbol of sin (Genesis 3:17-18), and the scarlet robe (Isaiah 1:18) wrapped around His raw back a symbol of Him taking the punishment for the sins of the world – yours and mine.

And He did it willingly. For you. For me. 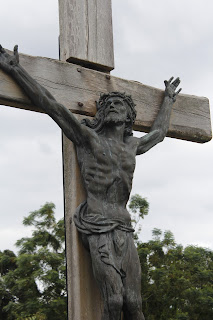 Greater love has no one than this, that someone lay down his life for his friends. John 15:13
At this point, a prisoner would have been dehydrated and in respiratory failure. Still, it was the custom for the naked prisoner to carry his own cross to the crucifixion site. Jesus’ arms would have been tied to the crossbar weighing around a hundred pounds, which lay across his ripped flesh, and he carried it uphill.
After being thrown to the ground, 7-inch spikes would then be driven through His wrists, severing the hand’s largest nerve and causing burning pain and paralysis. Finally, His feet would be nailed at the arches.
The mocking taunts and jeers were nothing compared to the horror Jesus faced – for you and for me. And this is only a summary. Words fail to fully depict the intensity of suffering and pain.
As He hung there, the muscles in His arms knotted in throbbing, excruciating pain. His chest muscles became inoperable. Unable to exhale, His lungs eventually collapsed and filled with fluid, which led to suffocation.

To ensure He was dead, His heart was pierced with a spear.

Surely he has borne our griefs and carried our sorrows; yet we esteemed him stricken, smitten by God, and afflicted. But he was wounded for our transgressions; he was crushed for our iniquities; upon him was the chastisement that brought us peace, and with his stripes we are healed. Isaiah 53:4-5

All this He did so we wouldn’t have to. He took all the punishment and shame for all our sins. Yours. Mine.

…but God showed His love for us in that while we were still sinners, Christ died for us. Romans 5:8

It’s hard to talk about and imagine, but I’m looking forward to Sunday. Sunday is the day of all days. Resurrection Day!
And they found the stone rolled away from the tomb, but when they went in they did not find the body of the Lord Jesus. Luke 24:2-3

Hope for every person who believes in Him and receives the forgiveness provided on the Cross.
I am the living one. I was dead, and now look, I am alive forever and ever! And I hold the keys of death and Hades. Revelation 1:18
Seems we should be thanking God for Sunday. Now that was a Good Sunday!
But Sunday would be nothing without Friday.

So thank God for Good Friday. 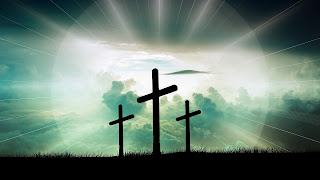 What about you? Are you thankful for Good Friday and what Christ did for you on the Cross, or are you one who doubts or even scorns Him? In the movie, “A Case for Christ.” Lee Strobel was one who scorned Him. But in trying to disprove who Christ is, he had no other choice based on the evidence, than to come to faith in Jesus Christ, the one true God. I encourage you to look closely at the evidence. See the movie and/or read the book. What a wonderful thing to do on Easter. Happy and blessed Easter!

Thanks for stopping by my blog. I hope it has blessed you. I would love to hear from you in the comments here or on social media. And I’d love you to stay in touch by subscribing to my blog here (plus you’ll receive my FREE download “Ten Prayer Tips for Busy Days“). Blessings!

Please check out my book, Pursuing Prayer – Being Effective in a Busy World here.