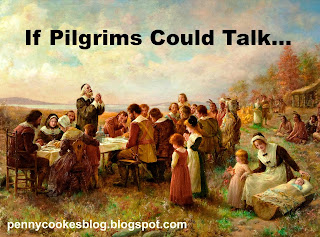 If Pilgrims could talk to us today, what do you think they would say?

With all the unrest in our nation, surely they would be deeply disheartened.
They fled the very religious tyranny which threatens us again today in this country. They sacrificed all and risked their lives in order to gain civil and religious liberty, not just for themselves, but for you and for me.
Suffering many dangers, setbacks and imprisonment before they even boarded the boat, many did not survive the voyage or the first winter’s cold and hardships. The ones who survived the numerous hardships sat down to give thanks to God for their newfound freedom as they feasted on venison, cod and corn
Today, on an 11-acre hilltop in Plymouth Massachusetts, sits a little-known historical monument which took 38 years to erect from planning to completion in 1888. But many Plymouth residents, like many of us, are unaware of its existence or take it for granted, much like we often take our freedom for granted.
I lived in Massachusetts for about the first 30 years of my life and never knew it

existed, until 2012 when Kirk Cameron made a documentary about it titled, Monumental. 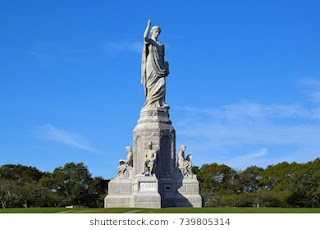 Formerly known as the Plymouth Monument, it is now called the National Monumentto the Forefathers. This 81-foot tall solid granite tribute is the largest granite monument in the world. It memorializes our forefathers’ ideals, which were later embraced by the United States. And it contains the blueprint for those ideals, the only successful strategy that has ever worked for all mankind.
As described in the film, a brave statue of Faith is carved at the top of the granite monument and faces northeast toward Plymouth England. In one hand he holds a Bible and the other points toward heaven, toward the God of the Bible, because that is where his faith comes from. The pilgrims knew this was the only thing that could bring true liberty – faith in the one true God.
Under Faith sits four figures – Morality, Law, Education and Liberty. These symbolize the pilgrims’ values, part of the recipe of what built America, the recipe that has brought more liberty than anywhere else in the world.
Some of the other figures symbolize evangelism which represents the need for the spiritually liberating Gospel; civil law and order which come from God’s laws; liberty, which is the fruit of obeying; education from the Word of God. 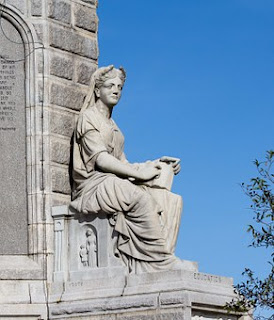 Education wears a wreath of victory to symbolize the victory resulting from training children in the ways of God. This training was meant to begin in youth, was the parents’ responsibility and was meant to be passed from generation to generation.

And these words that I command you today
shall be on your heart.
You shall teach them diligently to your children, and shall talk of them when you sit in your house, and when you walk by the way,
and when you lie down, and when you rise.
Deuteronomy 6:6-7
An inscribed dedication reads, “National Monument to the Forefathers. Erected by a grateful people in remembrance of their labors, sacrifices and sufferings for the cause of civil and religious liberty.” (emphasis mine).
There is so much more to this monument – it’s truly “monumental.” I’ve just given you a taste. If you haven’t seen the documentary, what a wonderful Thanksgiving movie it would make for your family.
If we ever forget what made this country so prosperous, we can look at this monument’s symbols and learn how to regain it. The early pilgrims knew liberty is a long-term blessing for doing things God’s way.
“If we ever forget that we’re one nation under God, we’ll be
a nation gone under.” Ronald Reagan
Pilgrims do talk today. They gave us this monument to speak to us for all generations to come. May we listen and never forget what made this nation so strong and so successful. May we embrace the Biblical values which made this country so blessed, and may we continue to pray for our nation and its leaders. And May God bless America!
Blessed is the nation whose God is the LORD. Psalm 33:12
Happy Thanksgiving!
What about you? Did you know about this monument, and have you had the privilege of visiting it?

Thanks for stopping by my blog. I appreciate your time and pray it’s been a blessing to you. Due to social media’s algorithms, you may not see when I post a new blog. But you can receive personal notification when I post by pressing the “follow“ button by my picture. And I’d love to hear from you in the comment section and/or by commenting on Facebook or Twitter.

I have written a six-week Bible study called Pursuing God in P.R.A.Y.E.R. – Six Steps to Prevailing Prayer. I would love to share the first week with you free and keep you posted of publication (due out in 2019). Just send me an email at lifecoachpenny@yahoo.com and mention the code FREE1st.