They say, “Be careful what you pray for.” That may be the case today when we pray, “Give us this day our daily bread.”

Did you know today’s daily bread is nothing like our ancestors ate? It’s made from wheat that is not what God originally created for our sustenance. Nor was our body made to digest it. 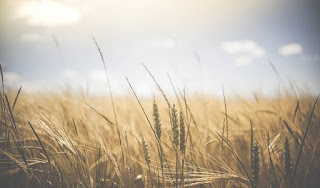 You may be one who has been wondering what all the hype is about gluten. I’ll explain more about that later, but first I’ll tell you my experience and why I’m “bootin’ the gluten.”

Several years ago, I became bloated, unable to lose weight, fatigued, had indigestion, a continuing rash, depression and brain fog. A nutritionist ran tests which revealed I was gluten intolerant. I eliminated gluten and felt a lot better.

But the nutritionist also told me after about six months I’d probably be fine eating organic bread once in a while. Well, I became lax and would have something with gluten more than once in a while, organic or not.

Symptoms returned and worsened, and I was covered with rash. A doctor then diagnosed me with Lupus, an autoimmune disease where the immune system attacks the skin, joints, and/or organs inside the body, which creates inflammation, pain, fatigue, rashes, poor concentration (called Lupus fog), digestive issues, etc. The medical community has no cure, only medication.

In addition, I was diagnosed with Sjogren’s Syndrome, another autoimmune disease which attacks saliva glands and tear ducks. Few people have heard of that one, but just imagine shards of glass in your eyes and choking from cotton in your throat.

As I learned about the increasing popularity of autoimmune diseases, I began connecting the dots between gluten, chemicals in our foods, and gut health (good and bad flora/bacteria’s). I learned many foods today are destroying our gut health, where most of our immune system resides.

Did you know scientists officially like processed food to autoimmune disease?

I’m finally convinced and am taking it seriously, and I’ve given up gluten completely. I feel so much better. I am on no medications, only supplements, including probiotics to maintain good gut flora. So that’s why I’m bootin’ the gluten!
In my last blog, Let Prayer Be Thy Medicine, I mentioned many Americans are not aware of some of the health-destroying toxins in our modern-day foods, and I promised to give information. I’m sharing this in as condensed form as I can, and I’ve included links at the end for further investigation. I hope you will read on because this is information that applies to all. Please share it if you know anyone who has any of the above symptoms (including ADD/ADHD).
Here’s the skinny (not!) on gluten:
According to the wheat belly blog,2“Modern wheat has been hybridized (crossing different strains to generate new characteristics; 5% of proteins generated in the offspring, for instance, are not present in either parent), backcrossed (repeated crossing to winnow out a specific trait, e.g., short stature), and hybridized with non-wheat plants (to introduce entirely unique genes). There are also chemical-, gamma-, and x-ray mutagenesis, i.e., the use of obnoxious stimuli to induce mutations that can then be propagated in offspring. This is how BASF’s Clearfield wheat was created, for example, by exposing the seeds and embryos to the industrial chemical, sodium azide, that is highly toxic to humans.” (emphasis mine)
As though God didn’t make it good enough?  Seems our daily bread has gone bad.
Sounds like Frankenstein to me. As a matter of fact, Frankenwheat3 is a term used to describe the modern wheat Americans eat today.
A word of caution: Just because something says gluten free doesn’t mean it’s healthier. Many times it’s just more processed junk food with trans fats, sugar, salt, etc. And, other grains can be genetically modified and/or full of toxins as well, which I’ll get into next time.

So to those who have tried gluten free with no results: First I would ask, did you do it long enough (several months to rid the body of its toxins) and did you do it 100%? Could you have been consuming gluten in foods you didn’t know it was in? Perhaps gluten was eliminated, but the alternative grains were GMO and not organic, and therefore toxins (pesticides, etc.) were still being consumed. Perhaps you have a dairy/casein problem, as well (it’s common to have a gluten and dairy problem together). Sometimes it’s yeast overgrowth and the body needs to be alkalized and detoxed. If it’s not working after a couple of months, examine what else might be the culprit of your symptoms. A nutritionist can do tests which can give a broader picture of what’s going on in your body.

Speaking of detox, you may feel ill as toxins leave your body (I did!). Patience and persistence are the keys to results.

If you’d like to get started eating gluten-free, see this link below.4

I’ll reveal more startling facts about wheat and other foods and their adverse effect on our health in my next blog. I don’t want to overload you all at once, but I’d love to share with you what I’ve learned in hopes it will help you with the food you provide for your household (Proverbs 31:15).

Then we can pray, “Give us this day our daily bread” – the bread God created, not Franken-bread.

References:
1 https://authoritynutrition.com/modern-wheat-health-nightmare/
2 http://www.wheatbellyblog.com/2012/02/wheat-is-not-genetically-modified/
http://www.cbsnews.com/news/modern-wheat-a-perfect-chronic-poison-doctor-says/
Note: He calls it a poison, but he doesn’t even talk about the worst of it. Come back next
time to learn more!
3 http://www.prevention.com/food/healthy-eating-tips/why-modern-wheat-considered-frankenwheat
4 http://www.glutenfreeliving.com/gluten-free-foods/diet/basic-diet/
I’d love to hear your stories and comments here or on Facebook. If you would like to receive a notification when I post, just click on the follow button and provide your email address.
Blessings and health to you, Penny

I have written a six-week Bible study called Pursuing God in P.R.A.Y.E.R. – Six Steps to Prevailing Prayer. I would love to share the first week with you free and keep you posted of publication. Just send me an email at lifecoachpenny@yahoo.com and mention the code FREE1st.